Barbara Fowler’s jazzy voice sizzles Pink Hot as she sets the mood for sultry loving in ways that only a hip sanctified songstress can. No stranger to the music industry, Barbara’s recording career began as the lead vocalist of the trio Sinnamon, whose chart topper "Thanks to You" soared to ..1 on Billboard’s Dance Chart, followed by "Knocking On My Door" which reached number 8 on the European charts. Barbara’s stellar performance on her latest debut CD, Soulful Reflections, is an eclectic mix of R&B, Jazz and Pop that delivers the musical goods and reveals range, originality and style.

Barbara’s collaboration with producer/song writer Chris "Big Dog" Davis was a truly organic process and their synergy has resulted in Soulful Reflections, filled with sensuous ballads that make listeners want to slow dance on a Saturday night and reflect on a bright Sunday morning. Soulful Reflections treasures include "Can’t Wait," and "I Guess I’m In Love With You" originals co-written by Barbara, and remakes of such timeless classics as "Betcha By Golly Wow," "God Bless the Child," and "The Shadow of Your Smile," which Barbara stamps with her refreshing sound. Inspired by the likes of Chaka Khan, Aretha Franklin, and Patti Labelle, Soulful Reflections reveals a softer side which authenticates her versatility to sing any genre of song and make you love it.

Barbara’s new music invites us all to step into love and to "soulfully" rock to the fabulous background beats of Chris "Big Dog" Davis, Guest artist, Kim Waters, plays a "soulful" saxophone on "God Bless the Child." "Soulful Reflections" is Pink Hot. 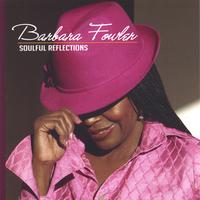 Along with Barbara’s debut CD “Soulful Reflections,” she can also be heard as a solo artist on Andre Ward’s “Crystal City” release.  Music critics say Barbara’s performance on the dreamy “Wishful Thinking” accents her vocal prowess and is reminiscent of a young Anita Baker.  Currently, Barbara is engaged in her next CD project and working on the DIVAS Yesterday, Today & Always International tour.

Barbara sang her first solo at age 6 in Hartford where she won the hearts of music listeners with her rendition of "America the Beautiful" at a school talent performance. Her passion for all types of music has never waned. As a voice student of the Julius Hartt School of Music and the Hartford Conservatory, Barbara’s raw talent was refined into the beautiful instrument it is today. She has shared the stage with music giants, such as Luther Vandross, New Kids on the Block, Evelyn "Champagne" King, Teddy Pendergrass, Phyllis Hyman, Angie Martinez, Lil’ Mo, Monique, Kevin Mohaghany & the Kansas City Band, Ray Chew & The Crew and the Ricky Minor Band. She has performed for audiences in Connecticut, Boston, New York, Philadelphia, Chicago, Florida and Atlanta to name a few. Barbara has won fans by bowling over what is perhaps the country’s toughest audience at Amateur Night at the famous Apollo Theater, earning her the title of "Super Top Dog " in 2001. She was subsequently invited to appear before a national TV audience on Show Time at the Apollo in 2002.